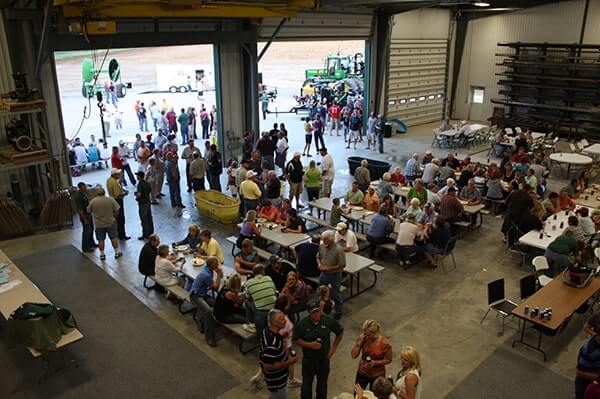 When Ben and Kathy Puck started Puck Custom Enterprises (PCE) they had no idea it was going to emerge into the family-run manufacturing business it is today.

The Pucks have operated a liquid manure application business for 30 years, annually handling millions of gallons of manure for area hog producers. They are now in the process of constructing a 15,000 sq. ft. building to expand the fabrication and assembly of equipment they make for handling liquid manure.

“The new building will allow us the opportunity to grow and have a place to meet the public and build the detail side of the business,” Ben commented. “People who are interested in our products can come see them and see how they are being built. They can get a sense of the differentiation between the application business that we have and the manufacturing side of it.”.

Ben, a 1977 Manning graduate, and Kathy, 1978 graduate, married in 1979 and planned to farm; however the farm crisis came along and prompted the need for additional income. Initially, Ben started the business with his brother in 1979.  With one vacuum truck they pumped out small manure pits for farmers in the area
and quickly learned there wasn’t enough income for two families.

Ben continued the business stating, “I really had no intentions of taking itmuch further but we kept getting calls from neighbors to do work.” Kathy said everybody had hogs and a small pit and work continued on a small scale until 1994 when the large 1000-head hog confinements came along.

“We had the equipment appropriate for that time and place, and as the evolution of the industry took a different avenue, we had the opportunity to grow, and we just continually walked along side of it,” said Ben. “So as soon as the industry changed, we changed our operation to fit it.” They went from vacuum trucks and simple land application to large wagons with the manure incorporated into the ground. Now, with miles and miles of hose, they are using systems that continuously pump with a drag hose. “We actually pull the hose behind the tractor. We just drive through the field in a structured pattern to apply the manure which works really well and it is very, very efficient,” he stated. “It takes a certain discipline to do it correctly.”

Puck Custom Enterprises has been pulling hose since 1998 and knows how to maneuver the hills, creeks and terraces in this area.“We’ve done very well and we’ve got it down to a real art. We also have very, very good help,” Ben stated.

PCE has modified a lot of its own equipment for a long time. With the application work being seasonal, the company began to build equipment to retain their employees. While a lot of the things they built were for their own benefit, they also sold items to other applicators who wanted to improve their process.

“The equipment that was on the market wasn’t what they wanted,” said Kathy. “They couldn’t find what they wanted, so they started building.” With a smile Ben added, “Our stubborn German know-how kicked in and we wanted to do it our way, and in many, many ways we have improved the system a lot. We think there has obviously been a need for it because we find ourselves fairly successful in the market place in trading the equipment.”

“This is a way that we can generate income in the off season to keep full-time employees because our application season is between 120 and 150 days a year. We need to retain high quality people and having them cross trained in the equipment that they use is actually a really big benefit for us. They help build it, they use it and they understand it. It’s starting to actually fit together nicely this past year,” he explained.

Everything they now build is basically proprietary as far as design and function. “We got a patent on our hose cart. We found that we could make it more efficient by just making it simple. We feel that we understand the industry in a unique way because we use the equipment and then we build it to fit our need. We’ve found that because of the extraordinary work cycles of our business (sometimes 40 hour weeks – sometimes 140 hour weeks) – that things need to be very simple so the chances of making a mistake or becoming frustrated can be minimized.

The new building will provide PCE employees with more work. Currently, the company subcontracts with another company to build the hose carts. Parts are brought back and assembled in the shop they created by remodeling the barn. The business has outgrown the space.

PCE has been crafting equipment for about five years. They started with the hose cart and now build three versions. They build five different versions of pump trailers and build swingers which are part of the fluid delivery system that attaches to the tractor. A new product completed last month is a three-point hose reel. They also make a variety of small parts.

Ben stated, “We think that we will always have a job if we can build it bigger, better, stronger and cost effectively.” Products are sold to farmers who handle their own manure and also to some of Iowa’s 435 commercial applicators.

“They don’t all pull hose. A lot of them pull wagons. We’re developing some equipment that can be used by wagon people, as well as hose people, so we think we are broadening the opportunity for a market for our products,” he said.

The owners considered building in Manning, but because of the large footprint required, they are building in the country adjacent to the farm. It will also enable a relationship between the two shops. The current shop will be used to repair and support the drag hose operation that is already in place.

He admits they have a lot to learn on the manufacturing and retail side of the business. He estimates 80 percent of PCE’s exposure/business has been through the Internet.

He added, “Our equipment doesn’t look like and isn’t built like anybody else’s stuff. It is built the way we want to do it. Some of our designs look very peculiar to some people and to some applicators as well, but to other applicators it makes perfect sense.”

The business involves the couple’s oldest son, Jeremy, who joined the business in 2003. Jeremy and his wife, Melissa, graduated from Manning in 2000. Melissa is learning the bookwork so she can back up Kathy who handles all of the office responsibilities. Daughters Nancy, MHS 2003, and Mary, MHS 2005, are both graphic artists. Nancy, who resides in Boulder, CO, handles the Web site, advertising and promotion. Mary resides in Iowa City and helps as needed. The couple’s son, Dan, MHS 2008, is attending Iowa State and plans to pursue ag engineering and return to the family farm.

Ben stated, “The goal of a small business is to be around as long as possible. We’re now past the 30 year mark and we’re still going. It might be something that our family can continue with when we want to step aside. We really think that this is just a child yet to walk.”