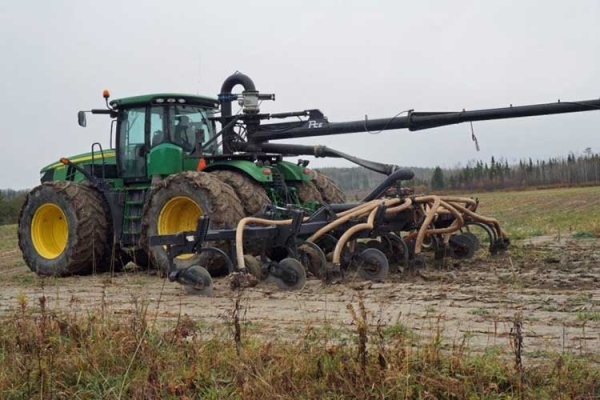 Two swine farms located in Fugèreville and Béarn are currently spreading manure by incorporation on 500 hectares of land for each of them. The technology used reaches virtually zero odor, according to many.

The slurry tanker digs a furrow six to eight inches into the ground, where it directly injects liquid slurry. © TC Media - Lucie Charest

The incorporation spreader digs a furrow six to eight inches deep into the soil. The liquid slurry is injected directly and the furrow is immediately closed again. La Ferme France and François Hébert, located in Ste-Martine, south of Montreal, is in its third application in Témiscamingue, which is spread out each time over a dozen days.

Currently, with only two swine facilities in operation, it would not be profitable for a local contractor to start manure spreading. On the other hand, the volume risks becoming more advantageous when the five facilities planned will be implanted on the Témiscamian territory. "If an entrepreneur is interested in developing this on-site service, it could eventually create new local jobs," said Étienne Hardy, Senior Pork Production Manager at Olymel. A third swine facility will welcome its first sows at the end of January 2018 on the Desjardins site located on the Chemin de l'Hydro in Lorrainville. As for the fourth swine facility, which will be located in St-Eugène-de-Guigues, the certificate of authorization has just been issued by the Ministry of the Environment. The public consultation is expected to take place on November 15th. "We should be set for the fifth site before the end of spring," said Hardy. We continue to work in this direction. "

Marco Hébert is a pump operator for the family business Fermes France and François Hébert. If you have the impression to recognize him, he was selected among the candidates of "Love is in the meadow" edition 2018.  Photo Credit: © TC Media - Lucie Charest

Until now, no complaint related to the odors would have been formulated, neither with Olymel, nor with the municipality of Fugèreville. Everything would be in a good neighborhood, depending on the different parties involved. A resident of Fugereville, among the most suspicious of the implantation of swine facilities in her hometown, admitted that this form of spreading met the promises made by Olymel in terms of odors. "For once there is something correct, I will not decry it, but this comment is only for spreading," she admitted under cover of anonymity. Same story on the side of the mayor of Fugereville, André Pâquet. "We have not received any formal complaints from the municipality," he said. Only when they have spread near the village - they must lift the injector when they turn at the end of the field - the manure flows a little off the ground at this time.  Otherwise, we can not do better as a process. " It is important to know that Olymel has put all the chances on its side to maintain a good neighborhood with the community. For example, in a radius of several hundred meters, the neighbors of the areas to be fertilized are forewarned, according to Étienne Hardy. "We send them postcards informing them of the dates of our work," he said. Also, we ask them to tell us if a particular event was planned for these dates. It is certain that if there were to be a wedding or a country party, we would take it into account so as not to cause any inconvenience."

The Boreal Farms Monitoring Committee is made up of representatives from Béarn, Lorrainville, Fugèreville, OBVT, the Ordre des agronomes du Québec and CREAT. Its role is to listen to the community and to follow up on commitments with Fermes boréales, three to four times a year. "Boreal farms meet the required conditions such as windbreaks, odor breakers, recovery is also done properly, said Richard Dessureault, chairman of the committee. They let us go, and sometimes even provide us with answers to our questions even if they go beyond our mandate. "