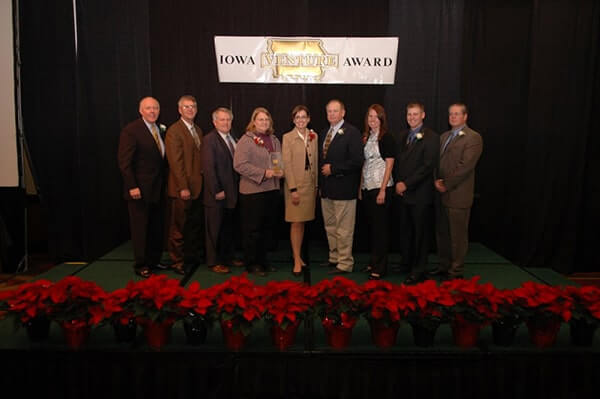 "The Iowa Venture Award is presented to Iowa companies which have made significant contributions to Iowa's economy through leadership, innovation and the creation of job opportunities."

The Iowa Area Development Group on behalf of Iowa’s rural electric cooperatives and member municipal electric systems has honored eight distinguished Iowa companies with the Iowa Venture Award. The Iowa Venture Award is among the most enduring and prestigious business recognition events in Iowa. Over 180 of Iowa’s finest business  leaders and companies have been recognized and honored since the program began in 1988.

The Iowa Venture Award was presented to Puck Custom Enterprises, Inc. Puck Custom Enterprises is a home grown Iowa company located on a farm south of the Manning community. Ben and Kathy Puck started their custom manure handling systems in the late 70s. Over time the company began to make design improvements to their manure application equipment, which spurred growth and demand for their umbilical cord design spreader. The company has captured both national and international interest for their products and service. Puck Custom Enterprises was nominated for the award by Western Iowa Power Cooperative.

“The Iowa Venture Award is highly regarded as a business achievement and recognition awards program with a strong history. IADG has recognized Iowa’s leading companies, large and small, that have helped sustain and grow the Iowa economy. Iowa Area Development Group on behalf of our sponsors is honored to recognize these outstanding companies that are investing in our state,” said IADG president, Rand Fisher. “Each year we honor business leaders and entrepreneurs with the Iowa Venture Award. Our luncheon ceremony allows our sponsors to thank these accomplished companies for their commitment to Iowa through innovation, investment and job creation,” added Fisher. Since 1985 the economic development efforts of IADG and their sponsoring utilities have helped generate over $5.6 billion dollars of capital investment and create or retain nearly 40,000 jobs for Iowa.

The 2010 “Outstanding Business of the Year” Venture Award was presented to Hawkeye Pride Egg Farm in Corwith, Iowa. The 2010 “Distinguished Leadership Venture Award” was presented to the Community Vitality Center, Iowa State Extension in recognition of leadership in the development of the Iowa Microloan Program and in assisting Iowa communities and foundations with entrepreneurship, development issues, and philanthropic opportunities.